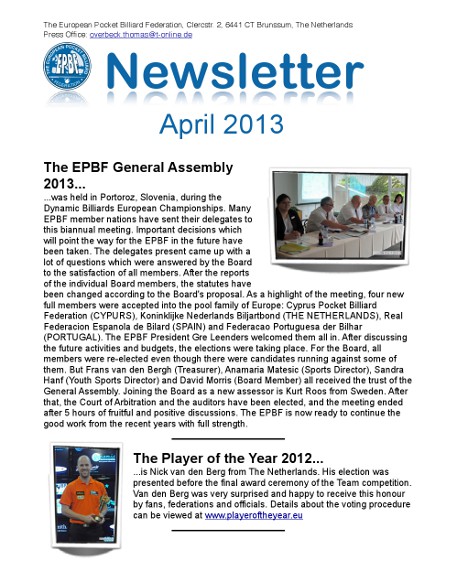 Click the picture to view the larger image - use "back" to return here.
The EPBF General Assembly 2013...

...was held in Portoroz, Slovenia, during the Dynamic Billiards European Championships. Many EPBF member nations have sent their delegates to this biannual meeting. Important decisions which will point the way for the EPBF in the future have been taken. The delegates present came up with a lot of questions which were answered by the Board to the satisfaction of all members. After the reports of the individual Board members, the statutes have been changed according to the Board's proposal. As a highlight of the meeting, four new full members were accepted into the pool family of Europe: Cyprus Pocket Billiard Federation (CYPURS), Koninklijke Nederlands Biljartbond (THE NETHERLANDS), Real Federacion Espanola de Bilard (SPAIN) and Federacao Portuguesa der Bilhar (PORTUGAL). The EPBF President Gre Leenders welcomed them all in. After discussing the future activities and budgets, the elections were taking place. For the Board, all members were re-elected even though there were candidates running against some of them. But Frans van den Bergh (Treasurer), Anamaria Matesic (Sports Director), Sandra Hanf (Youth Sports Director) and David Morris (Board Member) all received the trust of the General Assembly. Joining the Board as a new assessor is Kurt Roos from Sweden. After that, the Court of Arbitration and the auditors have been elected, and the meeting ended after 5 hours of fruitful and positive discussions. The EPBF is now ready to continue the good work from the recent years with full strength.

...is Nick van den Berg from The Netherlands. His election was presented before the final award ceremony of the Team competition.

Van den Berg was very surprised and happy to receive this honour by fans, federations and officials. Details about the voting procedure can be viewed at www.playeroftheyear.eu

...unfortunately, EPBF received the news that the WPA has cancelled the World 10-Ball Championships which were scheduled for June 8 -15, 2013 in Oslo, Norway. This is the second World Championships that was postponed in 2013 so far. The WPA President stated: "I did speak with the organiser today but as we have all been dreading, he has not lodged any guarantee with us to secure the event. He has informed me that it is not possible to get the event staged in Norway due to a number of reasons, but none less than the lack of local interest of having the event played there and a restriction of certain type of sponsors who are interested, but not permitted to advertise by Norwegian law." Hopefully, the other World events will take place as advertised. 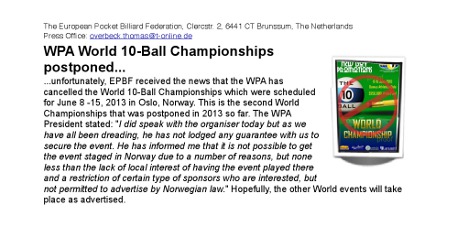 Click the picture to view the larger image - use "back" to return here.

View Pro9's front page!
Chat about this article in our forums.
Visit The Pro Shop to see new cues and gadgets.
Check out the Pro9.co.uk calendar for details of more events.