Gorst And Kaplan Are First Champions At Euros 2021 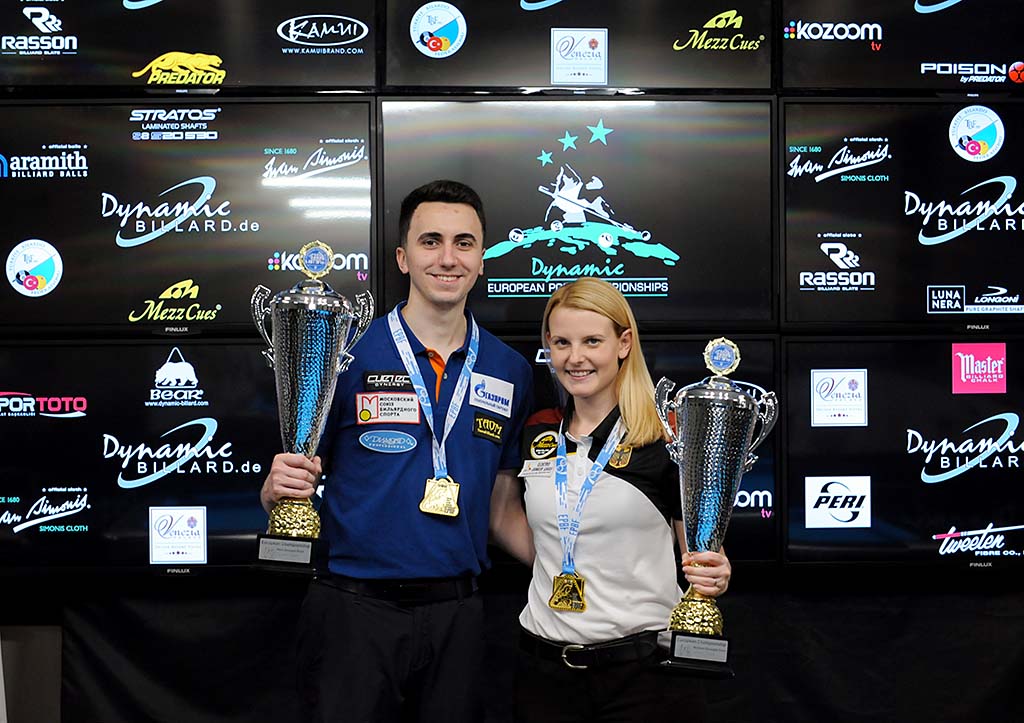 GORST AND KAPLAN ARE FIRST CHAMPIONS AT EUROS 2021

Reporter: Luke Riches on behalf of the EPBF
Photography: Â©EPBF

Gorst, the 26 year-old Russian, had flown into Turkey following a heavy stint of tournaments in the USA but any signs of fatigue were set aside as he won eight straight matches to secure the first trophy of the annual Euro pool festival.

With 95 players competing in the division, Gorst managed to stay on the winnerâs side with some dominant performances. Play resumed today at the last 32 stage and the 21 year-old superstar from Moscow didnât disappoint as wins against Kim Laaksonen (Finland) and Michael Schneider (Switzerland) took him through to the quarter-finals.

The race moved up from 100 to 125 as Gorst despatched Tim De Ruyter (Netherlands) and then veteran Swiss Dmitri Jungo 125-22 to secure a berth in the final. His opponent, the ever-dangerous Marc Bijsterbosch, had lost his opening match to Alex Montpelier but had battled through the one-loss side, including a big win against fancied Thorsten Hohmann, to reach the last 32.

Wins against Fabio Petroni and a revenge victory over the aforementioned Montpelier (France) put the Dutchman into the medals and a semi-final win over Roman Hybler ensured a show-down with Gorst for the championship. 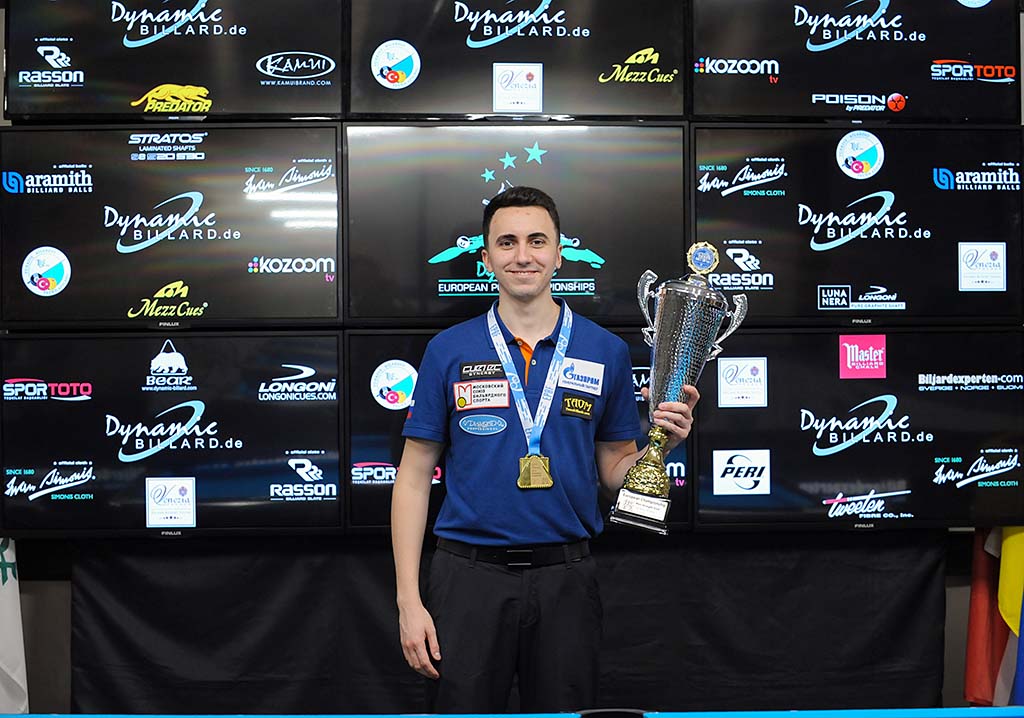 Fedor Gorst EC 21 Straight Pool Champion
Click the image to view the full size photograph - use "back" to return here.
It was the Russian who controlled the game though for a 125-11 win for the title.

âIâve just come back from the USA after a few tournaments there but Iâm a professional and totally dedicated to the sport, so I can only give 100% whatever the circumstances.

âIâm excited to have won the first menâs gold of the championships, but now itâs time to get some rest and prepare myself for the 8 ball,â added Gorst. 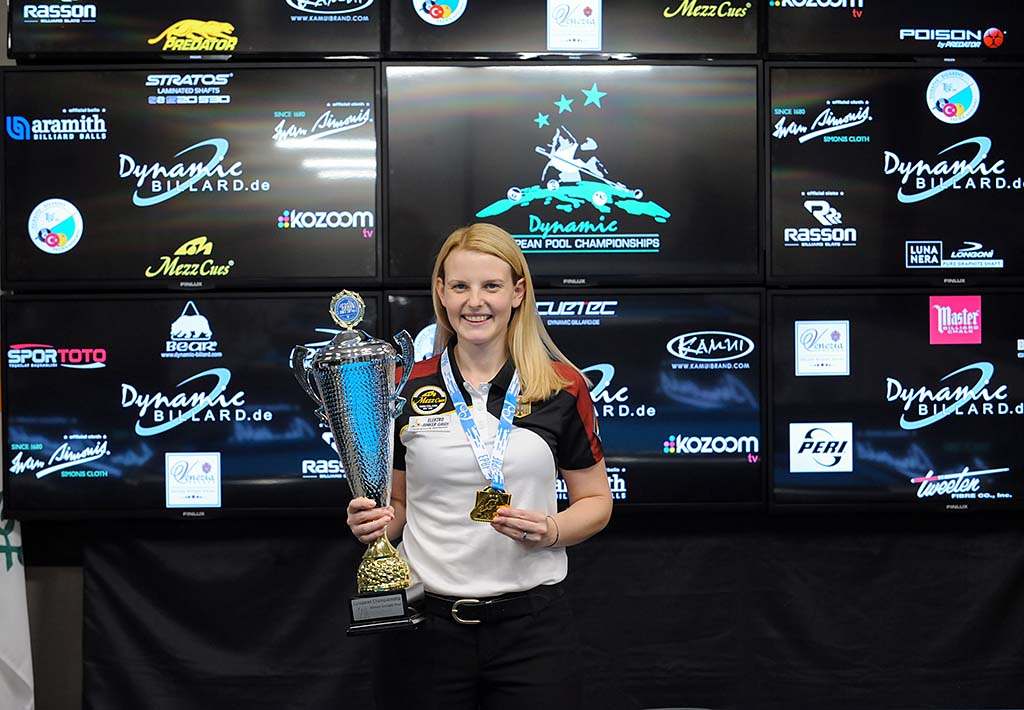 Ina Kaplan EC 21 Straight Pool Champion
Click the image to view the full size photograph - use "back" to return here.
In the ladiesâ division, revenge was sweet for Germanyâs Ina Kaplan as she headed the field of 36 players to take the gold medal in the ladiesâ straight pool, her first gold in her long history in the championships. Kaplan, 34, had been bounced into the loserâs side 75-31 by Spainâs Amalia Matas in the winnerâs qualification round. She battled through though, beating Monika Zabec (Poland) in the quarters and then compatriot, Tina Vogelmann in the semi-finals to set up her second match against Matas for the title. It was a very close one with Kaplan reaching the magic 75 with her opponent stranded on 69.

Commented Kaplan, âStraight pool is not my major discipline. In 9 ball and 10 ball I had three finals and always lost. My mind was going crazy. Finally, I got it now so Iâm over the moon! I never ever thought my first gold would come in straight pool â itâs a miracle, I think!

âI donât play straight pool that much. I practised before this tournament as I wanted to get off to a good start. Yesterday I didnât play that well but it was getting better and better and now Iâm standing here with the gold medal. Never give up, always play your heart out and believe in yourself!â see added.

Matches can be viewed live at www.kozoom.com

Results, live scoring and draw are available at www.epbf.com 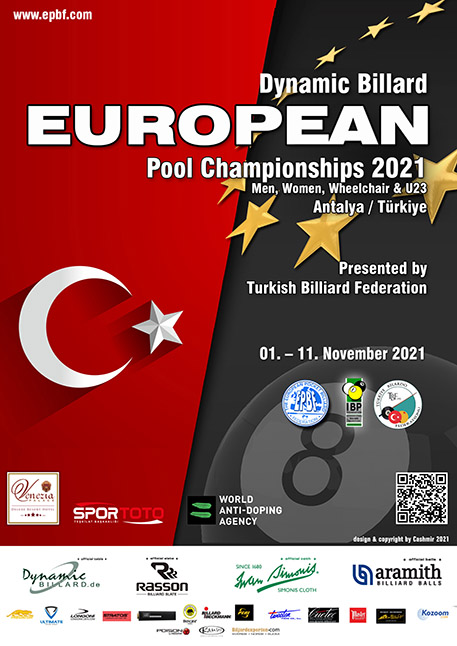