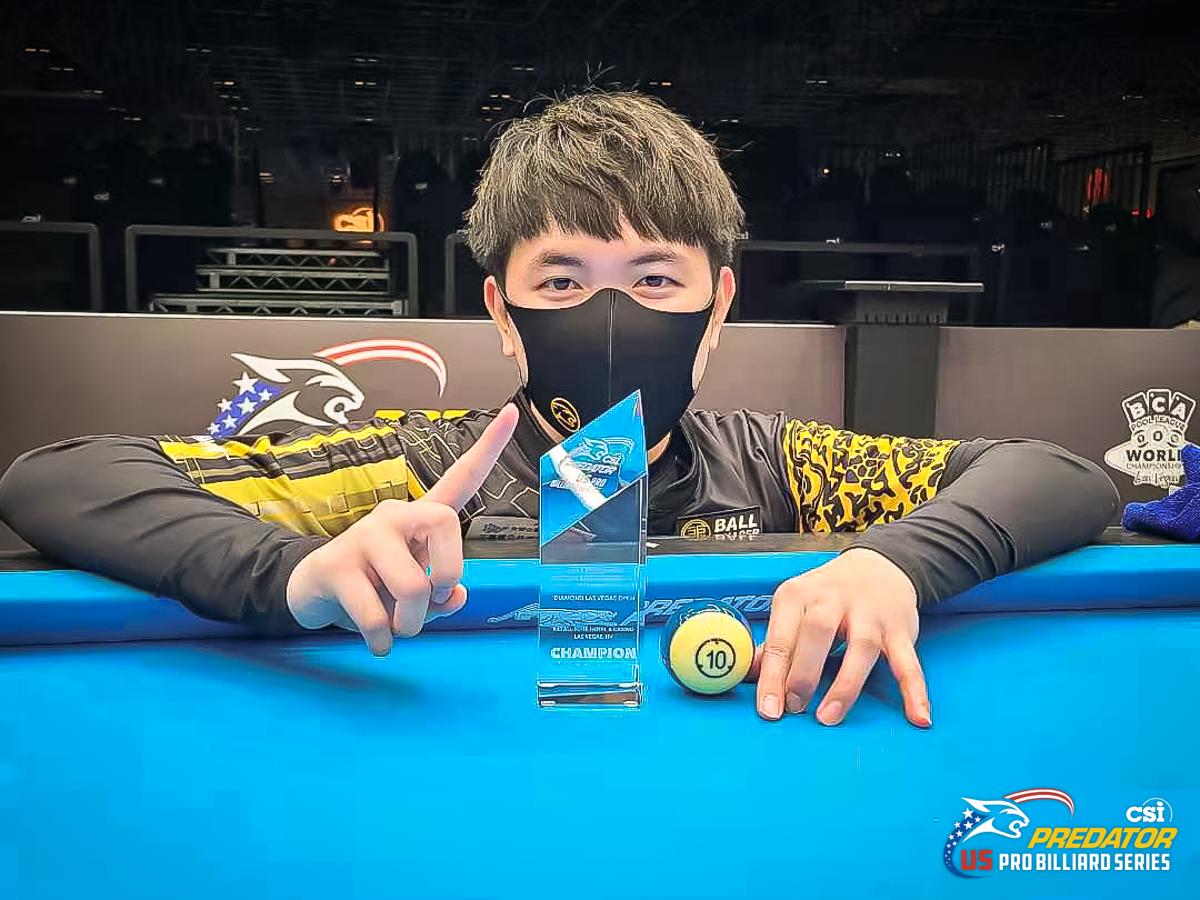 For the last half decade, Wu Kun-Lin has been hanging around the top of the leaderboard at professional pool events.

He placed third at the 2017 World 9-Ball Championship and followed that performance by finishing fifth at the same event a year later. He has a handful of top-five finishes in the Japan Open and, five years ago, Wu finished in third at the China Open. Despite the top finishes, the 25-year-old from Taiwan hasnât been able to break through and secure a victory.

That is, at least, until this weekend.

Using a smooth break and some pinpoint safety play, Wu cruised to the championship in the third annual Diamond Las Vegas Open, defeating Omar Al Shaheen in straight sets, 4-3 and 4-1, in Saturday nightâs finals at the Rio All-Suites hotel and casino. Wu, who posted an undefeated record during the four-day, 128-player event, managed to survive early charges not only from Al Shaheen in the finals, but also Estoniaâs Denis Grabe in the semifinals to earn the trophy and the $15,000 check.

Wu jumped out to an early 3-0 advantage in race-to-four, two set finals thanks to two victorious safety exchanges and a break-and-run. Al Shaheen, who earned runner-up honors at this yearâs World Pool Championship, climbed onto the scoreboard in the fourth game when he executed a table-length kick in of the 6 ball and ran out the rack. The young upstart from Kuwait then used a powerful break shot to break-and-run back-to-back racks and tie the score. Faced with a tricky 4 and 10 ball combination shot in the decisive game, Al Shaheen attempted to pocket the object ball but instead left a makeable 4 ball along the long rail, which his opponent pocketed and cleared the table to secure the set, 4-3.

Al Shaheen was plagued with mistakes throughout the second set, committing fouls in the first and second games as Wu again secured an early 2-0 lead. Al Shaheen was able to narrow the deficit in the next game when Wu overran position on the 6 ball and committed a foul of his own, but forfeited the table in the next rack when Al Shaheen committed another unforced error. After winning a safety exchange on the 2 ball in the fifth rack, it appeared the Kuwaiti was about to cut his deficit to 3-2 but left a routine 8 ball in the corner pocketâs jaws. Wu cleared the table, then tacked on another rack to seal the match and the championship. 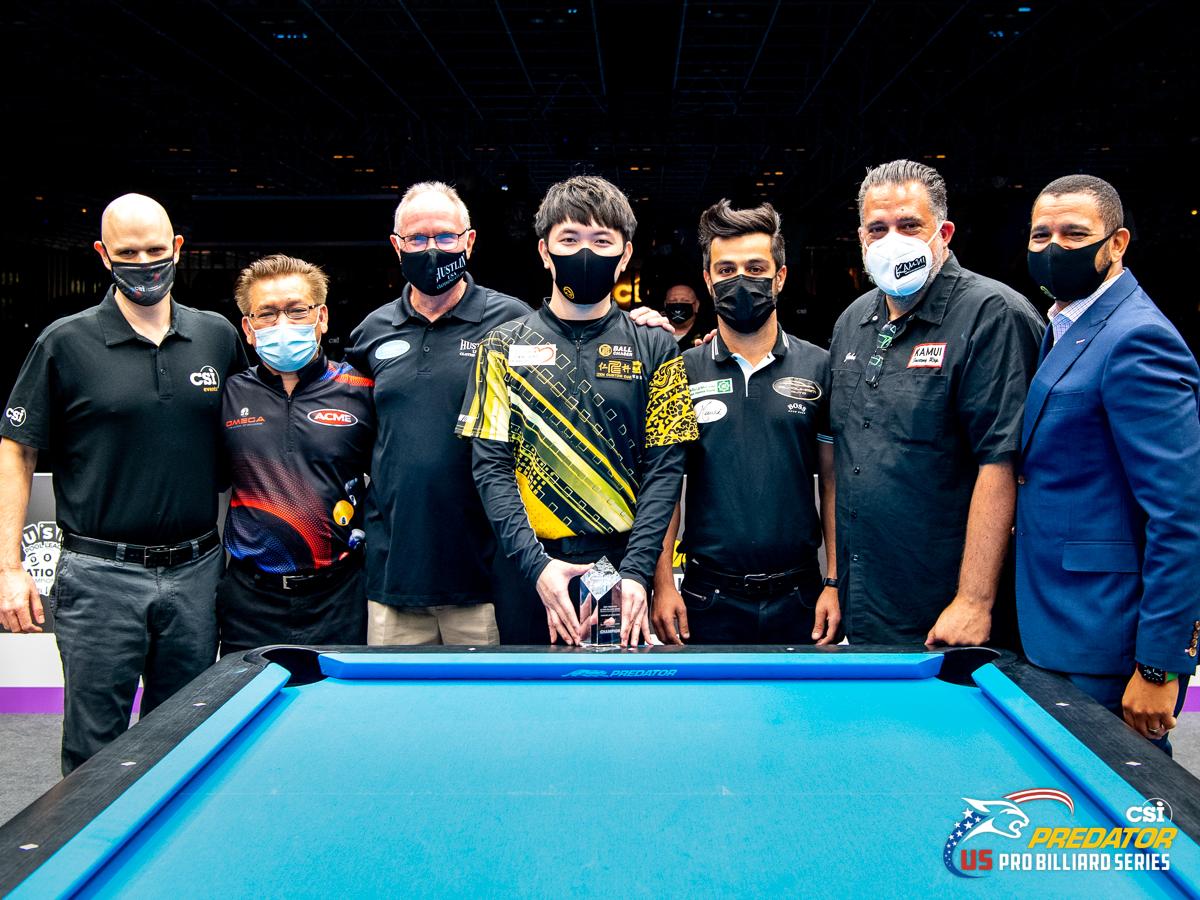 Photograph courtesy of Â©Erwin Dioni.
Click the image to view the full size photograph - use "back" to return here.
Things didnât look nearly as promising for Wu in the semifinals, as opponent Grabe used back-to-back pocketed 10 balls on the break in the first set to shut out his opponent, 4-0. Wu made the most of opening the second set with breaking honors, using a break-and-run and a tricky combination shot on the 5 and 9 balls to build an early 2-0 advantage. Grabe was able to return to the table after Wu scratched in the third game and tacked on two wins of his own to tie the score, but a missed jump shot on the fifth game gave control of the table back to his opponent, who ran out the rack to regain the lead then won a safety battle to claim the set. He was perfect in the deciding sudden death shootout, sinking four consecutive spot shots to advance to the finals.

Despite the error-infested final match, Al Shaheen turned in another impressive performance in a full-field, double-elimination event, defeating James Aranas, Ralf Souquet and Wiktor Zielinski during the single-elimination knockout phase to advance to the semifinals where he faced Shane Van Boening, who was still in stroke from his Texas Open championship a week earlier.

The Kuwaiti climbed into an early hole before he even screwed his cues together, being assessed a one-game penalty in the first set for arriving late for the match. Al Shaheen would quickly wipe out the deficit, using a Van Boening scratch to tie the match, then using two victorious safety battles and a break-and-run to claim the set, 4-1. The second set was the photo negative of the first, with the two competitors splitting the first two games before Van Boening used two safety victories and a break-and-run of his own to run away with the set, 4-1, and force a deciding shootout.

The two players continued to play even during the spot shot contest, with each competitor landing four straight shots before Van Boening missed in the fifth inning. Al Shaheen then stepped to the table, pocketed his fifth consecutive ball and breathed a sigh of relief.

The Diamond Las Vegas Open is a proud part of the CueSports International Expo in Las Vegas. The CueSports International Expo is also home to the BCA Pool League World Championships, USA Pool League National Championships and numerous industry exhibitors. The 11-day billiard extravaganza attracts more than 6,000 pool players from around the world, consumes 150,000 square feet, and uses over 300 Diamond pool tables with the goal of always providing the greatest pool experience in the world.

This event also is the second stop of the U.S. Pro Billiard Series, which features five open professional events between July and the end of the year. Created by Predator Group and amateur league operator CueSports International, these tournaments will run in tandem alongside of CSI league amateur events being held throughout the country. The winner of each competition receives a guaranteed spot in the $100,000-added 2022 Predator World 10-Ball Championship, which will be held March 28 through April 1 in Las Vegas at the Rio.

This competition is played on Diamond Pro-Am pool tables covered with Predator Arcadia Performance Cloth, with Predator Arcos II balls, and under the Predator Arena billiard lights. Kamui and Omega Billiard Supplies are also partners of the event. 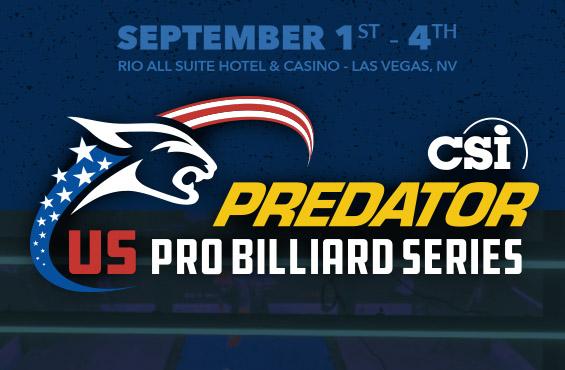