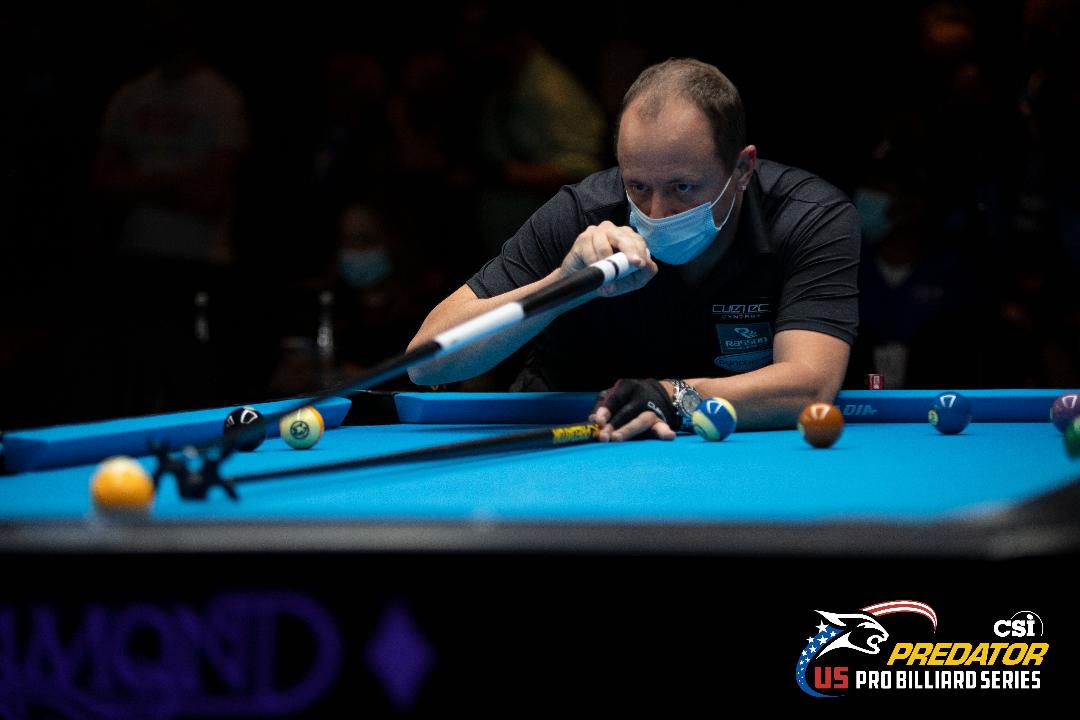 Shane Van Boening in action in Las Vegas
All photography courtesy of Â©Predator Group.
Click the image to view the full size photograph - use "back" to return here.
Diamond Las Vegas Open Down to Final 32 Players

The five-time United States Open 9-Ball champion had just completed an error-infested first set, as Reinhold turned a missed 9 ball and a scratch by his opponent into a 4-0 whitewashing. Needing to win the second frame in order to force a match-deciding shootout, the South Dakotan caught a break in the first rack when his opponent misplayed a safety on the 2 ball. Van Boening made the most of his opportunity, winning four of the next five racks then surviving the sudden death frame to remain undefeated in this weekendâs Diamond Las Vegas Open at the Rio All-Suites Hotel.

After clearing the table in the second setâs opening rack, Van Boening used a victorious safety exchange in the next rack and a misplayed 6 ball by Reinhold in the third game to increase his lead to 3-0. Reinhold, who competed with Van Boening on the United States Mosconi Cup team last year, stole a game back on a safety battle of his own and appeared positioned to cut into the deficit more in the fifth game, but scratched when he drew the cue ball into the corner pocket while trying to secure position on the 3 ball.

Van Boening was perfect in the shootout, pocketing four consecutive balls while Reinhold landed three out of four of the sudden death spot shots.

The South Dakotan is one of 16 competitors who remain undefeated in the four-day, 128-player event â which was reduced to 32 players by the end of competition last night. The format now switches from double-elimination to a single-elimination knockout phase, with brackets redrawn as the 16 contestants from the winnerâs side are matched with the 16 remaining players on the one-loss side. The competition resumes today at noon local time with the champion crowned later this evening. 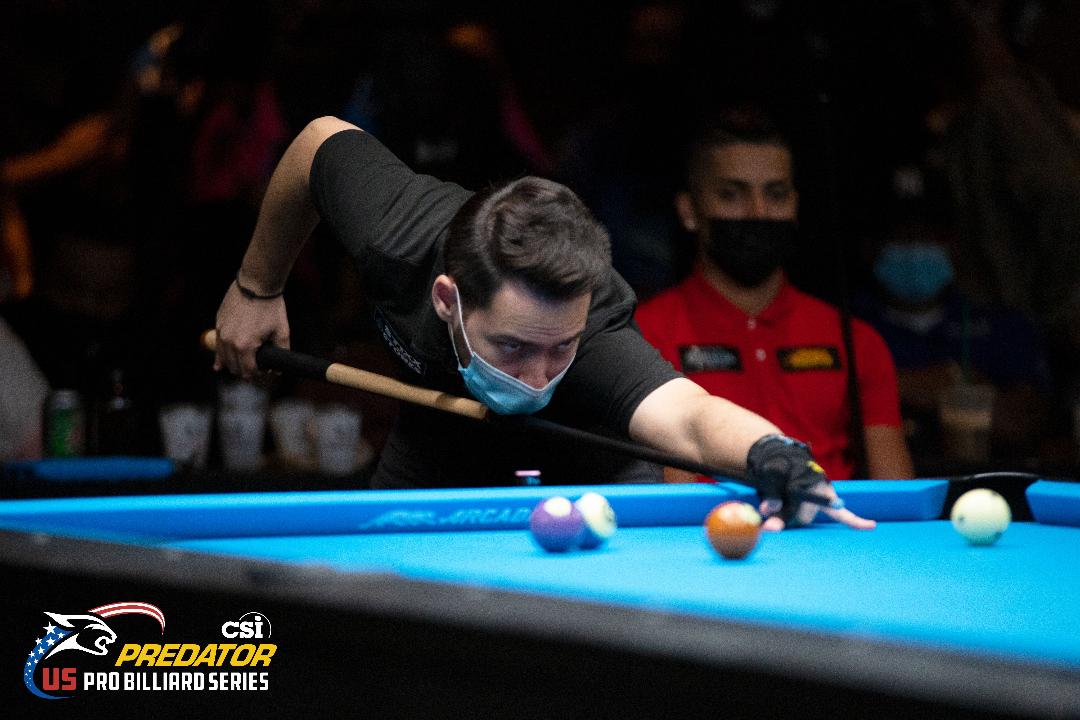 Click the image to view the full size photograph - use "back" to return here.
Also remaining undefeated is Dennis Orcollo of the Philippines, who has spent the better part of 2021 traveling the United States and gobbling up paydays in every regional event he can find â most recently taking home top honors in the Texas Openâs one pocket division and placing second in the 9-ball competition. The Filipinoâs mastery remained on display Friday night against Thorsten Hohmann, taking advantage of a handful of unforced errors by his opponent to secure a straight sets victory, 4-1, 4-2. After trading the first two games, Orcollo took advantage of a miscue from Hohmann to clear the table and take the lead, then used a victorious safety exchange and a missed jump shot by his opponent to close out the opening set. The following frame would mirror the first, with Orcollo taking advantage of a couple of unforced errors from Hohmann, who rebounded on the one-loss side with a victory over Sharik Sayed.

Joining Orcollo among the ranks of the undefeated is fellow Filipino Carlo Biado, who used masterful cue ball control to defeat reigning World Pool Masters champion Alex Kazakis in straight sets. The former World 9-Ball champion used a victorious safety battle and a pocketed 10 ball on the break to jump out to a quick 2-0 advantage, then took advantage of a Kazakis scratch and missed shot in back-to-back games to close out the set. In the following frame, the Filipino swerved the cue ball around an obstructing 10 ball to pocket the 7 ball in the corner pocket, then followed with a sharp cut on the 8 ball to build a 2-0 advantage. He then broke-and-ran twice â including pocketing four balls off the break in the fourth rack â to close out the match and advance to the round of 32. Also remaining undefeated are Arizona Open runner-up Edgie Geronimo, who defeated Francisco Sanchez-Ruiz, and World Pool Championship runner-up Omar Al Shaheen, who upset reigning Mosconi Cup Most Valuable Player Jayson Shaw.

The Diamond Las Vegas Open is a proud part of the CueSports International Expo in Las Vegas. The CueSports International Expo is also home to the BCA Pool League World Championships, USA Pool League National Championships and numerous industry exhibitors. The 11-day billiard extravaganza attracts more than 6,000 pool players from around the world, consumes 150,000 square feet, and uses over 300 Diamond pool tables with the goal of always providing the greatest pool experience in the world.

This event also is the second stop of the U.S. Pro Billiard Series, which features five open professional events between July and the end of the year. Created by Predator Group and amateur league operator CueSports International, these tournaments will run in tandem alongside of CSI league amateur events being held throughout the country. The winner of each competition receives a guaranteed spot in the $100,000-added 2022 Predator World 10-Ball Championship, which will be held March 28 through April 1 in Las Vegas at the Rio.

This competition is played on Diamond Pro-Am pool tables covered with Predator Arcadia Performance Cloth, with Predator Arcos II balls, and under the Predator Arena billiard lights. Kamui and Omega Billiard Supplies are also partners of the event. 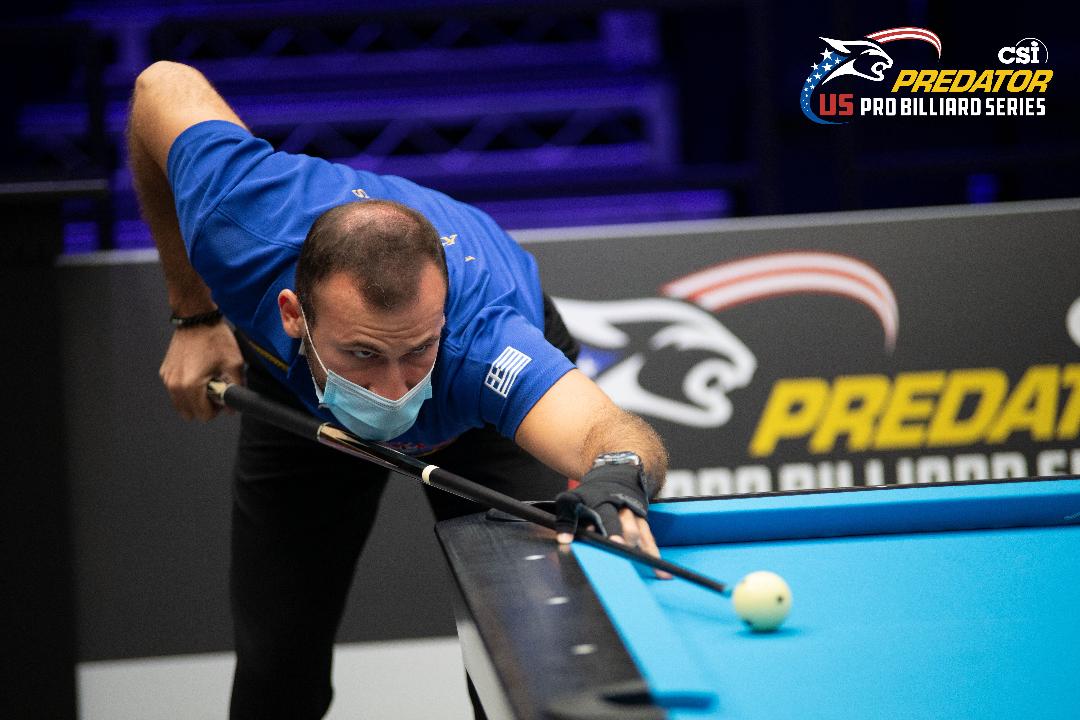